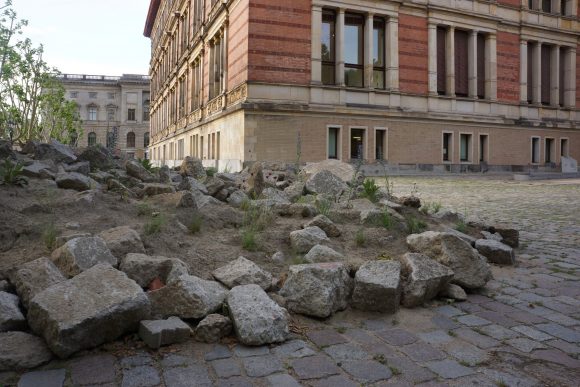 Reintroducing the Obliterated Flora of the Spree Riverbank

realized in collaboration with 100Landschaftsarchitektur

„Wake: Reintroducing the Obliterated Flora of the Spree Riverbank is an outcome of the research made in 2000 in developing Wake for Berlin. The city was at the time undergoing intensive urban renewal and I investigated the botanical history of 17 sites by studying the possibilities of the arrival of seeds by people, animals, wind, and any other accidents of history. At the same time, samples of earth were taken from each site, potted and seeds were germinated. After the historical research I met with Bernd Machatzi, a botanist with Landesbeauftragten für Naturschutz und Landschaftspflege, who was at that time along with other colleagues were compiling Der Berliner Florenatlas. We visited some of the sites I investigated to corroborate the botanical evidences with the historical research of the site. As we walked Machatzi, explai-ned that he had studied the banks of the Spree River just north of the Reichstag for his thesis and identified over 300 plants that form the riverbank vegetation of historical Berlin. After the wall fell and construction began, he met with two representatives of the new government chancellery that was being built. He asked if they could respect that historical and special vegetation. They did not think it was important. One of these plants, Gratiola offinalis, had its last habitat there and Machatzi rescued a specimen to bring home so something would survive.Flora selected from Machatzi’s thesis on the eradicated flora of the Spree Riverbank are growing in Wake: Reintroducing the Obliterated Flora of the Spree Riverbank and will be returned to the city of Berlin at the end of the exhibition.“