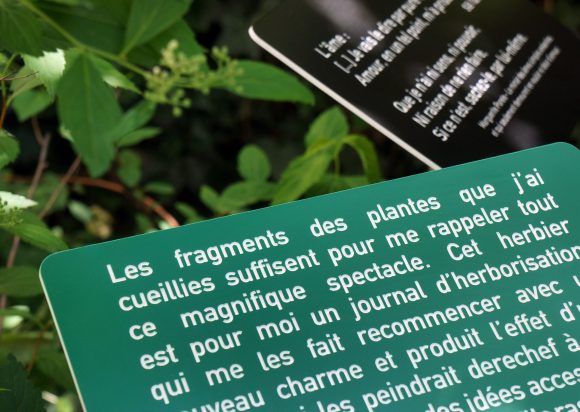 Situated at the heart of Paris, at the crossroad of stories from all over the world, the Richelieu site of the Bibliothèque Nationale is copious with stories. Its garden is where the multiplicity of relations opens to the outside. Working with plants and social histories of places, the artistic project carefully looks at the open space and its nature, and enhances cultural and dynamic processes: The creation of a garden as an artwork.

Taking into consideration Glissant’s poetics of relation, a selection of writers and their writings is brought into relationship in the garden. The network of the characters’ movements and relationships boast a multitude of overlays with Paris. We can assume that along with the stories and their narrators, plants and their seeds from any of the places they’ve been to would have arrived in the city. They all could have become part of the urban nature and culture. Their confluence in the Jardin Vivienne represents Paris as a global hub of cultural relations across time, space, and identities.

The garden as the new entrance to the Library contains plants explicitly mentioned in the selected writings. Plants endemic to the temperate climate zones were chosen deducted in the case of climatically more divergent places. The almost stereotypical layout of the ‘French’ parterre which was reintroduced into the Jardin Vivienne by Henri Labrouste in the 19th century is for us a fitting point of departure for the spatial reorganization of the courtyard. Our proposed asymmetrical rearrangement creates new encounters in the garden space – and beyond. Across all four sections of the parterre plantings areas loosely attributed to the individual writers are marked by some one hundred colored plaques that carry quotes from their texts.

The dissolved order of the French parterre thus serves as a framework for a botanical garden art project that – instead of a European-based taxonomical classification of plants – proposes the cultural intermingling of plants referencing their possible contact with fictional or non-fictional characters in the artists’ selection of writings. This is where the discussion of the cultures with the garden begins.