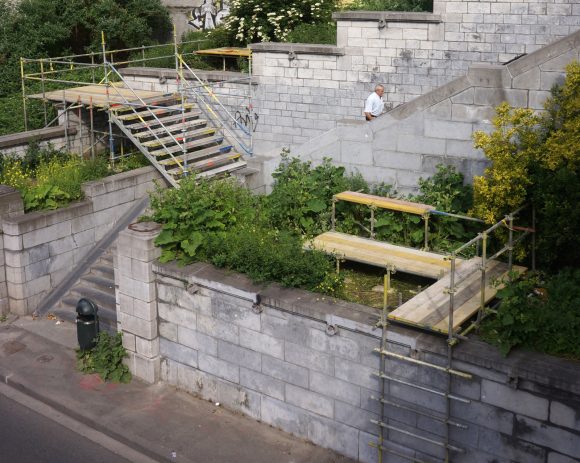 By introducing scaffolding structures in the interstitial spaces of the Delacroix staircase, the garden installation makes the heavy stone construction newly accessible. As a set of instruments for access, stay and observation, the scaffolding seeks to bridge the stairs with its immediate surroundings, activating these spaces, opening new paths of perception, and creating curiosity. The project enables the individual discovery of the aesthetic value of empty spaces. It also enhances the aspect of transition and migration as part of nature (and urban life).

General context – The event ‘Parckdesign 2012’ aims at reflecting the aesthetic, social, urbanistic and ecologic value of terrains vagues. At core this ambition is about public accessibility – factual, intellectual, or emotional – to these open spaces. The interventions within the framework of the event can in this sense not establish a newly designed landscape, but open new paths of perception. The projects can be part of a scrutiny of the existing „working landscape“ of the space.

Situation – The situation of lot 8 is characterized by the bridge across Charleroi Canal. The project location in fact consists of five sites that are interstitial spaces between or next to the staircases connecting the bridge level with the canal level. The staircases are built in a historicizing, heavy stone construction. Albeit meant to facilitate connection and interchange, they are in themselves impenetrable, unapproachable objects. Due to their current ‚freestanding‘ urban context, their hermetic character becomes even more obvious. Originally conceived as decorative additions to the stairs, the interstitial spaces are dis- and misused, the same lack of attention applies to the adjacent brownfields. The stairs‘ heavy representational gesture goes amiss in an unbound urban context that consists of vaguely maintained remnant ornamental shrubs, ruderal vegetation and a heavy mass of refuse and urban debris.

Project – The project aims to bridge the stairs with its immediate surrounding, confronting and activating also these spaces. As a set of instruments for access, stay and observation, a number of scaffolding structures extend the functionality of the staircase. The scaffolding interventions (re)bridge the staircases on both sides of the canal. The dimensions of the interventions vary and adapt to the situation: the largest structure leads into the ruderal field behind the stairs next to Metro station Delacroix, creating the possibility of a lofty walk on a thin scaffolding platform. A ladder-like structure leading to the staircase‘s raised planting bed at Quai Fernand Desmets is possibly more a suggestion of access, than an opportunity to be taken by every visitor. A scaffolding balcony at the Southeastern stairs marks the garden interventions in a long vista from Rue Ropsy Chaudron, sharpening the view for the cohesive context of the sites around the bridge.

The project strategy points at enabling the individual discovery of the aesthetic value of empty spaces. It also enhances the aspect of transition as part of nature (and urban life). Essentially, scaffolding creates structure and opportunity in a „construction“ period. It also points to the future, as a promise of something happening – mostly a hopeful outlook, as construction conventionally brings improvements. The use of scaffolding material thus answers at once to the temporary character of the installation project (and the Parckdesign event). It also comments on the constructive, active character of public open space.

The five sites themselves are not re-designed, but retain their raw, ruderal character. Where the existing soil is heavily compacted or where a (slight) disturbance has to happen for the construction of the scaffolding, the ground will be loosened, prepared, sown with a seed mixture of spices and left for ruderal growth for the rest of the vegetative period.

Communication – In order to better communicate the project and the focus object of the ruderal condition, a selected number of plant species are pointed out on small signs attached to the scaffolding rods. A small map shows original and geographical distribution of the plant. As ruderal vegetation often has a history of ecological migration, these signs open a larger geographical, international spectre of the site and the project – especially in the multicultural context of the neighbourhood.