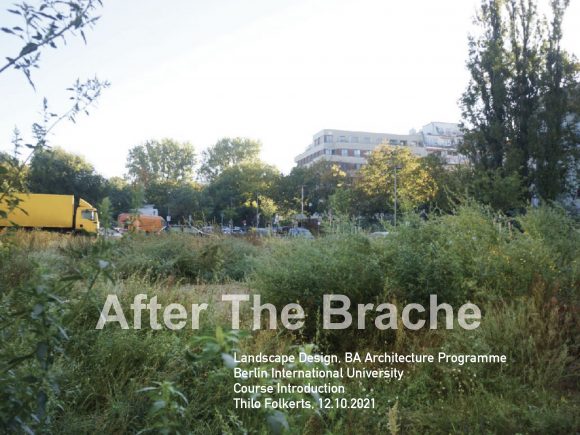 Context — In a phase of rapid development, Berlin faces the challenge of substantially redefining the culture of its urban landscape. While open space has always played a decisive role in the city’s develop-ment, Berlin’s urban situation after WWII, complex in a unique way, has led to dispersed and heteroge-nous urban situations. Within this context, as perhaps a finding of its own, a widely appreciated idea of urban nature has developed in Berlin, whose peculiarity is worth investigating and developing further. Site — A piece of land, centrally located between Kreuzberg and Mitte, formerly part of the wall-zone. Some 3000 square meters on the back-side of a school, concurrently fronting the public streetscape. At first glance a nondescript site, it bears the potentials of recent historic traces, a vibrant ruderal vegetation and centrality in a supremely hybrid urban situation. Studio — The short studio will develop a design inter-vention as an interpretation and activation of the site’s inherent potential. Possibly a publicly accessible school garden, or a spatial contextualization between East and West? At the same time the proposals will bear the responsibility of answering to the question of how we want to live in the city of Berlin.