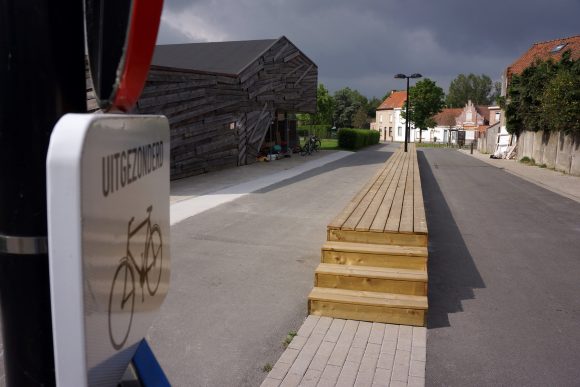 After the demise of the rural tram system, the network is now being transformed into bicycle paths. In Rollegem, next to a youth centre, such a path was recently laid out. The following interventive project aims to refocus the site along the theme of station; of meeting, coming together, communicating and exchanging. A new wooden platform abstractly re-enacts the situation of the former tram stop. The platform bonds the two asphalt surfaces that before were nonsensically separated into a station square. In incorporating the streetlights and opening the hedges around the youth centre a cohesive context is created from the pre-existing elements.

Situation – The area around the youth club Rollegem was recently upgraded functionally. The youth center‘s garden area itself was characterized by a nearly enclosing hedge of varying heights and qualities. A new access road to the rear facing parking garages of the adjacent houses was constructed, that connects the zigzagging forms of the garages and garden walls with asphalt. Between this access area and the youth centre runs a bicycle and pedestrian path that is part of the larger network of paths through the Leiedal landscape. At the road crossing of Tombroek Straat with Beek Straat the paths and roads fan out in many directions. A number of intermediate green areas are kept as extensive meadows. The situation was characterized by the clear (linear) layout where the path follows the former tram line, yet by a diffuse and unclear situation where old and former paths meet and run off into many directions. It seems as if the place has lost its story, its plot line. The thread is loose.

Project – The project aims to refocus the design of the site along the theme of the ‘station’; of meeting, coming together, communicating and exchanging. In this, the youth centre now has an opportunity to expand its activities toward the outside and to gain a platform to communicate to the public. Along the linear structure of the bicycle path, the jeugdlokaal might become something like a station in itself. Initially one main element was introduced that might serve as long-term stage set of this public station square.

The Platform – Set between the bicycle path and the access road, a new ‘platform’ abstractly reenacts the situation of the former tram stop. More importantly though, the platform brings together the two asphalt surfaces that before were nonsensically separated by a narrow strip of ruderal vegetation. With the element of a platform set between them, the paths become a square. The platform, set at a height of 60 cm, can be used as a seat and/or a stage. Essentially only a simple volume, it becomes a socially functional element in the public space. At either end of the platform white concrete pavers are inserted between the paths. Both paver areas connect the bicycle traffic coming from the garage access road to the bicycle path on the former tram track. The existing streetlights are incorporated creating a ‘station ensemble’. The platform structure made of wood on a wooden substructure is also a reaction to the materiality and gesture of the building‘s facade.

Ordering – In order to further clarify the spatial situation, the linear structure of the tram line is enhanced. A low clipped hedgerow accompanies the line of the former tram track. Using the locally common linear strategy of defining space by hedges, the back part of the youth centre is newly delineated by a low hedgerow (Ligustrum vulgare Lodense) making the lawn area into a more secluded and more usable ‘backstage’ area. At the same time, the hedge next to the entrance into the building of the youth club is removed in order to open the situation towards the youth centre‘s new ‘station square.’

Further measures – Youth is about expression. Completing the mise-en-scène of a station square, the initial project proposal called to fit the youth club with an advertisement surface. For this a standard billboard could be used to announce events at the centre, or at other cultural venues in the region, or for own experiments in graphic expression. The billboard would be an experimental interface between youth and public. The content of the billboard should not be commercial and fully under the direction of the youth.